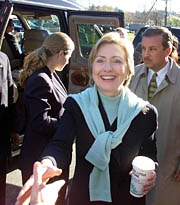 Hillary Rodham Clinton stepped from the White House to the United States Senate tonight, becoming the first presidential spouse to be elected to public office.

From the beginning of the race, Ms. Clinton's lack of roots in New York State became one of the major issues of the campaign. When Mr. Lazio entered the race in May, he immediately began emphasizing that he was a native New Yorker, while portraying Mrs. Clinton, an Illinois native and longtime Arkansas resident, as having moved to New York only to run for Senate.

Mrs. Clinton was backed by black, Hispanic and Jewish voters and those who identified themselves as union members, liberals and moderates. Women, particularly working women, supported Mrs. Clinton strongly. Mrs. Clinton was also backed by people who said their financial situation has improved over the last four years.

Adam Nagourney, who has covered the Senate race for The New York Times, reported that Mr. Lazio's supporters seemed startled throughout the day by wave after wave of interviews with voters that signaled that their candidate might be heading for defeat.

The Republicans noted that Democrats hold a 2-million-vote edge in New York. Several of Mr. Lazio's associates also argued that the Suffolk County Republican was handicapped because he got into the race late, only after Mr. Giuliani dropped out because he was diagnosed with prostate cancer.

She began her run with an exploratory listening tour which took her around the state talking to hand-picked audiences. Early in her campaign Mrs. Clinton concentrated on the upstate region, building on a strategy pioneered by Mr. Schumer. Like Mr. Schumer, Mrs. Clinton made an effort to win a bigger percentage of the rural upstate vote than Democrats traditionally win.

The survey of voters leaving the polls on Election Day suggested that the strategy had paid off: Republicans needed to win the region by 10 points to counteract the Democratic edge in New York, and Mr. Lazio did not seem close to approaching that margin.

Mrs. Clinton crafted that strategy when she believed her opponent would be Mr. Giuliani, who enjoyed strong support in the city but was less well known upstate. Nevertheless, Mrs. Clinton's work upstate appeared to serve her well. Because of his late start in the race, Mr. Lazio had to scramble and was unable to match Mrs. Clinton's extensive visits upstate.